The Taranis is a pseudo-Juno weapon featured in Fuga: Melodies of Steel. It is first found by Mei Marzipan within a mountain's cave in "How It All Began", while the in-game story instead has the children of Petit Mona find it through the radio.

The Taranis is an incredibly large tank that is capable of housing about 12 individuals at a time. It has multiple rooms that all survival basics for its inhabitants. This includes a workshop, bedroom, messroom, observation area, and a farming area that's capable of growing food & housing two livestock.

Its size completely overshadows the majority of other military vehicles that are seen throughout the Free Lands of Gasco, even almost pummeling a few tanks belonging to the Berman Empire. The caterpillar tracks have no trouble traversing through most terrains and can even potentially plow through villages.

Inside the Taranis is an old-fashioned radio that serves as a form of communication for Jeanne's other half. Through it, she encourages the children to keep moving forward and sometimes insists on utilizing the Soul Cannon.

The most powerful component of the Taranis is the Soul Cannon, which requires a sacrifice for utilization. It's only to be used when its inhabitants are in an extreme pinch.

To activate the Soul Cannon, a sacrifice must ready themselves into the basement's Soul Cannon Chamber which holds a single seat. When its door opens it releases what sounds like screams and cries of past sacrifices. Once the sacrifice is seated and closed in, Jeanne announces a brace for shock and activates its auto target function. The cannon, with the tank's tendrils glowing and exposed, then turns over to the front, expands, and fires.

The sacrifice is quickly disintegrated and their Bio-Energy is consumed to fire the cannon. What is left of them is typically an article of clothing.

It's possible to instead utilize a dummy to trick the Soul Cannon into firing, saving any living beings inside the Taranis from being put through a sacrifice.

An unknown human child, who Jeanne refers as her "counterpart" in her archives, is stored deep inside the Taranis. He was only found when Jeanne seeked an alternative way to fire the Soul Cannon in Fuga's best ending.

The Era of Humanity

The Taranis was first made in the tumultuous era of humanity. With the rise of Titano-Machina, many nations sought to find a way to fight against them without collateral damage. This led to the Taranis being formed, with the AI Jeanne eventually being inserted into it as part of its functions. It was named Taranis after the Celtic God of Thunder.

It eventually fought and defeated the Vanargand with its Soul Cannon. In doing so however, fell into a pit and was lost for many years. The AI Jeanne was split into two halves, an older, more logical voice on the radio that was nonetheless overwhelmed with the desire to kill Vanargand once more, and a younger, more empathetic hologram of light that put the lives of its crew first.

The Bringer of War

Consumed by the desire to prove itself, the voice on the radio created the legend of the Devil (the Taranis) and God (Tarascus) and manipulated Shvein Hax to awaken Vanargand once more, making it wholly responsible for the tragedies and catastrophes of the game. It then called the children together to pilot the tank and coaxed them to pursue the Berman army in order to save their families. Its true motivations were revealed once it faced the Tarascus, showing its true colors as a sadist thirsting to defeat its old enemy.

A Savior Once Again

Throughout the journey, the girl of light made several appearances urging the children not to fight. However, because the children were made to save their families, they had no choice but to. In the wake of the fights with the Tarascus and Britz, the caring side finally confronted her logical side, forcing the latter to admit that she still cared for the children and that they were one. This finally led to the two reuniting into the true Jeanne and guiding the children in order to save Gasco.

Its final fate differs depending on the ending. In one, it despairs over having sacrificed one of the children and eventually collapses into dust. Canonically the Taranis rests peacefully in the remains of old Paresia and the Vanargand, with Jeanne having finally faded away, leaving the future to the children...

A model of the Taranis from the Quebec press conference 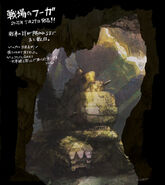 The Taranis as depicted in the Fuga manga 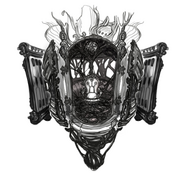