Solatorobo: Red the Hunter, also known as Soratorobo -Sore Kara Kōda e- (ソラトロボ -それからCODAへ- lit. Solatorobo: And Then, to CODA) in Japan, is the second mainline game of the Little Tail Bronx series and the spiritual successor to Tail Concerto.

Solatorobo's story is divided by two parts, which are further divided into ten chapters each. This summary will go over each part and its respective chapters. This section is under construction.

The story begins with a radio report of the Shepherd Republic's current status, reporting that earthquakes have been shaking the area multiple times in recent history for currently unknown reasons. As the report goes on, Red and Chocolat go over their current job of retrieving a stolen confidential file from the Hindenburg. The Asmodeus makes way to the targeted airship.

As Red makes his landing onto the Hindenburg with the Dahak-AZI03 and investigates, he comes head to head with the crime-riddled Hunter's guild named the Kurvaz, who lament over having two different intruders in quick succession. The news of another person boarding the ship prompts Red & Chocolat to hurry up with the task at hand. This leads to a dangerous confrontation with one of the guild's least respected head members, Captain Grumpf. Red manages to ward off Grumpf and continue searching for the file, which is found in a locker room.

With Red in need of some extra loot he manages to open the locker room's hidden half. In this part of the room is an intricately patterned medallion incased in glass. Seizing the opportunity he takes the medallion. This causes the center of the medallion to begin glowing brightly as a colossal beast emerges from beneath the clouds.

The quaking and dramatic change in the atmosphere causes the Hindenburg to lose altitude & begin falling apart, prompting Red to swiftly escape before he ends up having to fight mysterious dark beings that seemingly appear out of nowhere. As he continues to try finding a way out he stumbles upon a knocked out Felineko boy. Despite the chances of the boy being deceased, Red's kindness gets the best of him and he attempts to save the child.

Red manages to get out of the torn airship with the mysterious Felineko and return to the Asmodeus. Both Red and Chocolat are shocked and confused over the swift turn of events during their mission, though their attention is refocused to the boy who is still currently knocked out in one of the ship's beds. They suspect him to be the one who had infiltrated the Hindenburg right before them.

The story of Solatorobo truly kicks in here, as Red and the mystery Felineko's encounter was fated.

After the release of Solatorobo, CyberConnect2 would go on to release a series of light novels and some short manga that delved deeper into the game's world. The first of them, chronologically, is "Ragdoll Elegy". The stories would go on to also include small amounts of world building for Mamoru-kun and Tail Concerto.

After Tail Concerto's release, CyberConnect2 had plans to make a sequel named "Tail Concerto 2". It was to be an upgrade from the original and be released on the PlayStation 2. However, this proposal was rejected by Daisuke Uchiyama, the executive producer of Bandai (Now known as Bandai Namco) due to Tail Concerto's poor sales figures, stating that, "a sequel to a game that did not even sell was ridiculous."[1]

After plans for the original Tail Concerto 2 were cancelled, CyberConnect2 would go to work creating an entirely new Little Tail Bronx game from scratch. It took 10 years of conceptualization and 3 years of development. During that time, CyberConnect2 had proven their worth with other titles such as .hack and Naruto and had gained more reputation ever since.

This new Little Tail Bronx game was still pitched as "Tail Concerto 2" to Bandai. While the project was given the green light, Bandai had requested CyberConnect2 to stop pitching it as "Tail Concerto 2", stating that if it were to be made, it would have to take place in an entirely new world. Thus, the developers started from the ground up and pitched a reworked proposal titled "Solatorobo", which translates to "Robo to sky".

On October 21st, 2010, Solatorobo had won the Guinness world record for airing the most TV commercials for a single product with a whopping 100 15-second commercials in Japan.[2] All of the commercials were aired on the same day, which would unfortunately become a detriment to the game's success as no other televised advertising was created outside of setting the record.

Most of these 100 commercials would briefly cover parts of Little Tail Bronx's lore (as of Solatorobo), characters in the game, and locations. A complete Youtube playlist of every ad in HD can be viewed here.

Solatorobo's main form of advertising in the western world was through video game magazine coverage. While slim, a few notable magazines had featured the game as preview articles such as Nintendo Power, N-Gamer[3], and the Official Nintendo Magazine[4]. This was all in the age where magazines were being phased out in favor of online journalism, thus further crippling Solatorobo's success on a global scale. 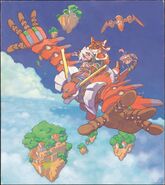 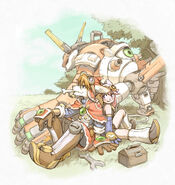 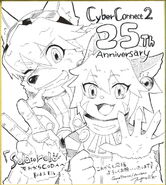 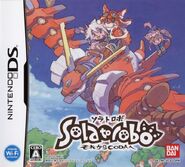 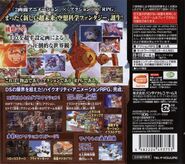 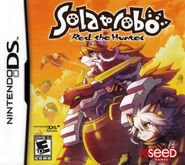 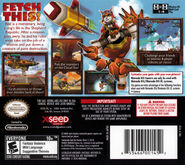 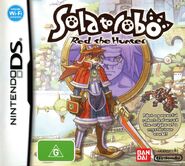 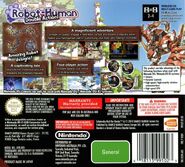