JP + FR: Ayumu Murase
Malt Marzipan is the protagonist of Fuga: Melodies of Steel. He is the leader of a group of children who are out to rescue their kidnapped parents from the Berman Empire.

Malt is the oldest child from Petit Mona. Ever since his parents died from an illness, he has been living as a moosheep herder on his grandparents' farm with his little sister Mei Marzipan. He has a strong sense of responsibility and shows great courage.

Malt's appearance is that of a typical villager, though he appears to wear what look like roughed up bandages on both his calves. His breed of Caninu is a German Shepherd.

Malt was born in Petit Mona. Shortly after his little sister Mei was born, his parents died of illness and was then taken care of by his grandparents. He took it upon himself to be a responsible older brother and look after others as the oldest, an attitude that eventually extended to the rest of his friends. As he grew up, he became a proficient moosheep herder, and lived his days in peace until the Berman army attacked.

How Malt and his friends began their journey on the Taranis has different interpretations. In the game, they were all called together by the Taranis and were surprised when they found it. In the video "How it All Began", Malt already found the Taranis beforehand[1]. He and Mei lost control of a moosheep, which then led them to find the Taranis. When the army attacked, he was reminded of the tank and decided to find it once more in order to save everyone.

Malt is possibly the most willing to sacrifice himself to the Taranis's Soul Cannon due to his overwhelming sense of responsibility. If chosen to fire the cannon, he immediately heads down to the basement's pod without protest. Despite some anxiety over seating himself he still stands by being the oldest & most responsible. If he's the first to go, his fellow crew mates seem fairly oblivious to the cannon's workings and wonder if he makes it out okay.[2]

After the Gasco War

Canonically, Malt and all of his friends survive the war and are recognized as heroes. He spends his days peacefully looking after moosheep with Mei. They hoped these sunny days would last forever...

Though according to Fuga's secret movie, they would not. Malt and his friends are forced into war once more, and he is even consumed by vengeance, swearing to kill his hated enemy.

It's revealed that Malt was recognized as the hero that led the children of the Taranis. His race as a German Shepherd and his own profession as a moosheep herder, along with his heroism, inspired the name of the Shepherd Republic.

Malt is all about damage. As a Cannoneer, he has the second-highest attack among all members, but the second slowest to compensate. He has no status effect or defensive skills, All he has are area attacks, single-target attacks and buffs that increase attack power for him or for the current gunners. Even as a support member, his skills increase all of his partner's damage and his link attacks as a support deal the most damage of the entire crew. His Hero Mode doubles the damage of all his normal shots. Using Malt is all about doing the most damage to finish of your enemies as quickly as possible with practical, straightforward attacks. Buff his speed, and you have a reliable damage dealer for the whole party. 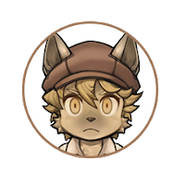 Malt in Comedies of Steel 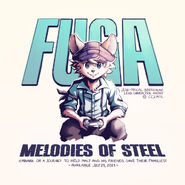 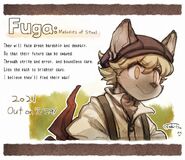 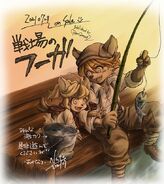 Malt as depicted in the Fuga manga