JP + FR: Sachi Kokuryu
Kyle Bavarois is one of the main characters in Fuga: Melodies of Steel. He is one of the first few children to escape the invasion of Petit Mona and board the Taranis.

Due to his parents' circumstances, Kyle moved from the capital to the unfamiliar countryside of Petit Mona. Even though he often has a bad attitude and foul mouth, he is actually quite gentle and lonely. He has a crush on Hanna Fondant.

He finds the countryside boring and yearns to return to the capital Parsesia. He prefers "culture" and wants to be surrounded by music & art. In Fuga it's shown that he at least attempts to utilize a farming hoe despite seeming easily exhausted by labor.

Kyle is an Abyssinian Felineko. Since he originates from the city, his fashion sense is tidier than the other children of Petit Mona. His hair and facial features are also quite feminine when compared to the other boys of the group, giving him a slightly higher class allure.

Kyle was originally the son of a store owner in Paresia. He was fairly rich and had many friends, but unfortunately the store went under. Kyle then saw his "friends" were just there for his money and connections, and his family was forced to move to the countryside. He found the place boring, however, he found solace in having a crush on Hanna. Despite the attempts of the others to befriend him, he kept his distance while secretly trying to get close to her. Throughout all of this though, he secretly resented his father for the move, and eventually lashed out at him.

It would be the last time they spoke before his family was taken by the Berman army. Filled with regret, he joined the other children of Petit Mona in boarding the Taranis and fighting to take their families back, hoping to at least see his father one last time.

Kyle hesitates to offer himself up to the Soul Cannon, but cannot bring himself to see the others die. He cynically consoles himself by saying that, due to his behavior, they probably wouldn't miss him anyway. He is very wrong, as when the children find out how he sacrificed himself for them, they mourn for him.

Canonically though, Kyle and all his friends survive the war. He reconciles with his father and starts helping him with work. Technically, due to the destruction of Paresia, he's the only one who lost his home, and he still longs for urban life. Despite that though, he finds some measure of contentment in living with his friends in Petit Mona.

When it comes to the Machine Gunners, Kyle is the most straightforward and offensively oriented of them all. He specializes in anti-armor and anti-air tactics. He gains the earliest access to more powerful armor-destroying skills, has a strong attack that ignores armor, his final skill decreases armor by 3 ranks and his link attack has a chance to decrease armor. He has no skill that targets every enemy, but he does have skills that hit all aerial enemies and even a powerful one that strips multiple armor ranks. He has a skill that buffs accuracy and his support ability passively does this as well, which are incredibly powerful for making your Cannoneers viable anti-air fighters. Finally, his hero mode strengthens all his attacks into critical hits, making him a veritable powerhouse. When it comes to fighting air power and heavy armor, Kyle is a valuable player to have on your team.

Kyle's support ability increases the accuracy of the primary character; this can incredibly effective when paired with Canonneers with powerful area attack Skills. At Link Level 10, Canonneer area Skills will have 100% accuracy even on flying enemies; this enables characters like Boron and Malt to wipe out entire groups of flying and weaker ground enemies with a single Skill. 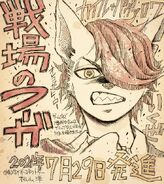 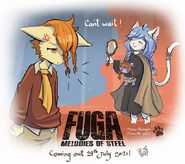 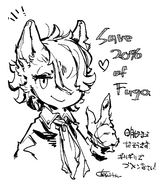 Kyle as depicted in the Fuga manga