ESRB: T
IARC: 16+
Fuga: Melodies of Steel (戦場のフーガ, lit. "Fugue on the Battlefield") is the newest installment to the Little Tail Bronx series. This game is in the perspective of 12 Children who commandeer the Taranis, a large tank, as they take on the Berman Empire.

A standard and deluxe edition are currently available and are both digital. The deluxe edition includes a digital art book, soundtrack and bonus DLC.

The game has a spin-off animated comic titled "Fuga: Comedies of Steel" and will also be seeing a manga adaptation by Takafumi Adachi, beginning serialization sometime in 2021.[1]

Story is under construction.

The story begins in "How it All Began", where the children stumble upon a cave home to the Taranis. Nobody knows of what the tank actually is, though, with Mei and Malt thinking it could be God. The adults of the village warn the children to never approach the cave again.

As news spreads of the Berman Empire's rising dominance over the Free Lands of Gasco, Malt & Mei's grandfather reassures the two that Petit Mona would remain safe. However, the empire soon destroys the village and take the adults hostage. Luckily the children are hid away from the army thanks to Hanna's mother. She instructs the trio to run back to the mountain cave.

On their way there, Malt, Mei and Hanna meet up with Boron, Kyle and Socks. All of them continue rushing to the Taranis's cave, with Socks being the first to identify it as a tank. Upon this realization the boys swiftly investigate the control room and manage to bring the massive vehicle to life. The Taranis immediately makes its way to Petit Mona where it nearly tramples over the Berman army. This immense amount of power shocks Malt, though despite witnessing how destructive it can be he continues to refer to it as God.

A secret movie is available to view in the game after unlocking all of the title screen's gears. The short movie features a series of rough drawings and a vague prologue.

The children's struggle continues when the Taranis reawakens with a few hostages (who appear to be Socks, Boron, Hannah, Mei, and Britz). In order to save them, the remaining few children board the Tarascus and wage war with whoever has kidnapped their friends. At the end of the secret movie, Malt mutters vengeful words of hunting down & killing whoever has hurt his loved ones.

A new unknown child is introduced in this movie and Wappa is absent. The main antagonist appears to be the Taranis' last sacrifice in the best ending of Fuga.

CC2 is currently addressing the lack of global subtitles for this movie.

Unlike the other two entries in the Little Tail Bronx series, where the player controls a Robo that can walk around & toss enemies, you take control of your squad in turn-based combat with prominent JRPG elements.

During battles you must ward off a number of enemies who come in waves. To do so, each available teammate takes turns attacking with unique abilities. Some of these abilities can stagger enemies out of a turn, allowing the player to get an advantage. Knowing the enemies' weaknesses is also the key to victory.

When the player isn't in battle the game enters an "Intermission", where you can interact with your teammates to increase friendship, earn experience, and learn new abilities. During these you can also go on expeditions to fight enemies and gather items, all while avoiding traps.

The Taranis is customizable in many ways. The player can upgrade the tank with experience and certain item combos. Teammates can also be organized to man certain parts of the tank, which can significantly improve abilities depending on bond levels and the team's overall stats.

Fuga is difficult to play by design, pitting the player against tough decision making. Losing in a battle will reset the player back to either during or right after the last intermission. If the player does not want to regress back to the last save point while in a pinch, they can choose to fire the Soul Cannon. Using this ability will cause an immense amount of damage against your enemy at the cost of a teammate's life. Sacrifice is the only way to utilize the Taranis's super weapon and use of it will affect the game's ending.

Fuga was first announced in March 2019 as part of CyberConnect2's self-publishing initiative titled "Trilogy of Vengeance", being developed alongside Tokyo Ogre Gate & Cecile. All three games were conceived under the company's "NEXT PLAN" agenda, which aims to have CC2 develop self-published titles for the next decade.[2] Fuga is the first of all three games to release, with it being the biggest priority within the company.

The game was originally slated for a late 2019 release before being pushed into early 2020. While the COVID-19 pandemic served as a factor to the game being pushed even further back into 2021, the true reason for these delays is due to constant revisions to the game.[3] The development team was not satisfied with the quality of the game during the first two delays and would strive to further flesh out the final product.

A physical release was planned for Fuga back in 2019 as there was a significant demand for one from fans.[4] This plan, however, had fallen flat as CC2 would later announce that the game would be a digital-only release.[5] Despite this, director Yoann Gueritot continues to subtly hint that this idea may come back to fruition.

According to CyberConnect2, Fuga, despite being set in the same world of Little Tail Bronx as Tail Concerto and Solatorobo, has no connection with the latter two. It is a completely new work that is independent and complete by itself, so players can play it without knowing any of the lore from the previous games.[6] Fuga still makes fairly frequent references to Solatorobo despite this claim.

The main theme to Fuga, titled "Flower on the Trails" (轍に咲く花)[7], is composed by LieN, making their return to the Little Tail Bronx series since Little Tail Story. The non-lexical words "リンサヤラ リナルーサ サヤラー" / "Rinsayara Rinaluusa Sayaraa" sung throughout the song are a callback to Solatorobo's "And Then, to CODA" which used the phrase just as liberally. 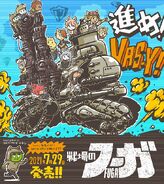 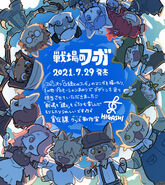 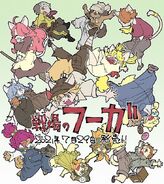