Felineko (ネコヒト, nekohito), also referred to as Cat-People in Tail Concerto, are one of the main races in the world of Little Tail Bronx. Similar to felines in both appearance and personality, Felineko tend to be independent and introverted. With their talent for magic and spells, they are generally uninterested in technology.

Felineko is a general category which is comprised of a number of different breeds. These breeds can vary in physical appearance, ranging from smaller breeds such as Cats and Leopards, to larger ones such as Tigers and Lions. The Cat breed can also be divided even further, with breeds such as Maine Coon and Siamese falling under the category. In some breeds appearances can vary between male and female. For example, male Lions have muscular builds as well as scruffy hair, whereas female Lions have builds similar to a female Leopard's.

Felinekos and Caninus are able to marry as well as have children together. The children of a Felineko and Caninu couple will either be Caninu or Felineko.

Unlike humans, Felinekos cannot distinguish as clearly between the primary colors, though they are slightly more evolved regarding their dichroic color sense when compared to real world cats and dogs. All of the spectra from green to red are yellowish, with purple to blue all being a dark blue. Pupils of eyes can either be closer to humanoid, or very much like a cat.

Felinekos have small feet, and are often depicted as standing on their toes to further emphasize the catlike trait. They do not have claws, but can retract their nails just like real cats can with claws. Fur is thin in general, but can be thick around certain places like elbows, shoulders and chest.

All Felinekos are born with the potential to perform magic by having the capability of sensing and using Nono, though in most cases it requires training. Some Felinekos are prodigies and require no training at all.

Proficiency at magic varies and can even change with time from being good at magic to bad or the opposite, sometimes for seemingly no reason. Eventually, anyone using magic becomes permanently incapable of using more. This occurs sooner by using larger spells or using smaller ones more frequently.

Some Felinekos can levitate rocks, generate forcefields, and even possess elemental magic such as ice powers. Large scale magic can also be performed in groups, capable of magnifying the power of spells even to the point of being able to destroy islands, though an increasingly high complexity the larger the spell is limits this use somewhat for war purposes as it can be interrupted easier.

Magical abilities vary between Felineko breeds, with pumas being the most powerful and saber tooth tigers being the least. There's a clear trend of one's physique correlating with how powerful their magic is, where the more muscular breeds are less likely to cast spells as efficiently as slimmer, more dexterous breeds.

While both Caninus and Felinekos can be afflicted with the same illnesses, there are certain ones that are unique to each race. Such illnesses tend to be more severe.

Much like real world humans, Felinekos can suffer colds. Symptoms include sneezing, runny nose, diarrhea, and escalating to fevers.

Fox's Disease is an incredibly fatal illness with a 100% fatality rate. Tell-tale signs of this disease include excitability, confusion, and an irrational fear of water. Two to seven days after the disease hits a victim results in them entering a coma and dying from respiratory distress.

Matabako, a favorite among Felinekos, is their equivalent to cigarettes and is consumed identically. The leaves of the matabako plant are dried, fermented, and rolled up into a bullet-shaped wrap. Special scissors are used to cut the end of the rod and is lit when one is ready to smoke.

The ratio of Felinekos and Caninus varies from country to country. The Federation of Abyssina is home mainly to Felinekos, which make up about 70% of the population. Conversely, only around 2,000 Felinekos reside in the Kingdom of Prairie, about 4% of Prairie's total population. Other countries with a more even balance exist, such as the Shepherd Republic, with 40% of the population being Felinekos.

Felineko/Cat-People as portrayed in Tail Concerto 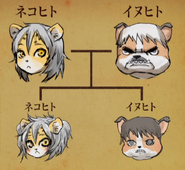 When the two different races have children, they can only be either one or the other