Saori Gotō
Elh Melizée is the main heroine of Solatorobo.

With her long lifespan and world-worn self, Elh is a very reserved & fairly recluse Felineko. She prefers to keep her distance from others as to prevent connecting to them emotionally. Initially the only reason for her to approach people was to form "contracts", though throughout the events of Solatorobo she progressively becomes more social and friendly.

Elh is from an ancient clan called the Paladins, whose sole purpose was to perform the Rite of Forfeit in order to seal Lares & Lemures. This task requires the use of Medallions associated with specific Titano-Machina, and a chosen Inheritor of it to perform the rite. Elh became the Inheritor of the Lemures Medallion 300 years ago, when the former Inheritor, who was her teacher, passed it on. Performing this ritual is not the only occasion she uses her magic, though, as she can also use great amounts of it to create protective force fields and control Titano Machina.

Despite her cold and judgmental exterior, Elh is quite soft emotionally. She often blushes when teased and does feel deep emotions for those she loves dearly, though she often clams up or feigns ignorance if somebody takes notice. Elh also has an intense fear of insects which, while appearing irrational at first, was caused by extreme trauma.

Physically stunted ever since she inherited the ability to perform the Rite of Forfeit, Elh has the appearance of a young teenage Felineko. She also possesses a slightly androgynous appearance which fools Red into believing she was a boy until walking in on her taking a shower. At the end of Solatorobo, Elh uses the last of the medallions Nono and soon begins feeling the passage of time again. She even mentions later that she feels like shes grown a little since then, although it is unclear by how much.

Her sense of style isn't very common in the present world of Shepherd Republic, giving away that she's of a different time. Her breed is described as being a typical American shorthair without any more specifics. Elh's general color scheme is black, white, and gray for clothing, light pink fur, with golden accessories and orange eyes, creating a feeling of mystique while complementing her colder side.

Elh's history begins at the age of 14 when she was living in the village of Ragdoll. Her life seemed somewhat normal at this time, other than being the most likely candidate for the next in line to inherit the Medallion due to her magical talent, until the Medallion tied to Lares is activated prematurely, to which Elh then witnesses the sacrifice of Terina. It's right after this that Elh feels a sense of dread of potentially becoming the Inheritor of the Lemures Medallion.

As she ponders over becoming an Inheritor, Elh senses Ragdoll's barrier wear thin. She rushes to the current Inheritor of Lemures's Medallion for help, only for their meeting to be violently cut short. Baion invades Ragdoll, putting the area into flames and killing its inhabitants (including Elh's parents). Her teacher is pierced by a shrapnel as soon as destruction is aimed their way. She quickly prompts Elh to present the Medallion and then passes on her power to perform the Rite, making Elh the new Inheritor. She then swiftly sends Elh to the Sacred Realm for safety as her cabin continues to burn within the flames.

After some time had passed Elh finds herself unconscious in the scorched wasteland that was once Ragdoll. Nobody is left to be seen from her point of view. Everything disappearing right before her eyes becomes so overwhelming that she runs away crying & screaming for help. As she runs towards the top of a hill she notices Béluga Damiens, the only other survivor of the disaster. He remained unresponsive to her calls.

Coming to terms with her new responsibility as an Inheritor of the Lemures Medallion, she holds the Medallion close to her chest. To her, it is the only memento she has left of Ragdoll. This is the same night that her entomophobia begins, as she was attacked by a swarm of insects when trying to catch some rest in the woods.

Not too long after this entire ordeal is when she comes to feel eternal youth which would stunt her physically for the next 300 years.

In a time 9 years before Elh's fated encounter with Red Savarin, she's tasked to find the next sacrifice to seal Lemures when the Medallion begins to react to its impending awakening. She goes out to search for which individual has been chosen, following its increasing vibrations as she draws closer. Eventually she meets 9071 who is an escapee from the Hybrid Facility and the next sacrifice.

The two at first have a slightly difficult time getting along as 9071 first assumes Elh's a thief. Once she holds his hand, though, he senses her true intentions. Elh is upfront about her purpose for being around 9071, since he's already lamenting living by the time they've met. She is nicknamed Reaper at this point. It isn't too much longer when the opening to the Sacred Realm appears in a different sky island, which prompts the two to sneakily board a cargo ship to their destination.

When Elh and 9071 arrive to the Sacred Realm, she begins the Rite of Forfeit. Even though she puts up a calm front it's obvious to 9071 that she feels incredibly anxious. As the Rite of Forfeit is complete and moves on to the Words of Rest, Elh's anxiety begins to show. She begins choking on her words. Since he predicted this weakness and sees a window of opportunity, 9071 snatches the Medallion back from her and begins laughing almost maniacally. Falling for his bait, Elh completes the ritual in a far more composed yet panicked manner.

After a blinding white light engulfs the area, Elh finds 9071 fallen on the ground. She laments his manipulation in a way that shows she regrets her actions. He comforts her by stating she's completed her mission and had given him a purpose in life. He disappears and passes away, confirming that Lemures has been successfully sealed. Elh continues to wail over the situation, once again in a place where none can hear her. 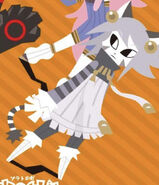 Elh in the final credit image for Part 2