Shigenori Soya
Bruno Dondurma (ブルーノ・ドンドルマ, Burūno Dondoruma) is one of the main antagonists of Solatorobo. He was the former leader of the Kurvaz and was also a notable figure for establishing the biggest guild in the Shepherd Republic. He had proactively made a public name for himself and never broke the law outright, but instead took advantage of loopholes to execute his schemes.

Bruno is a very haughty and arrogant character. Despite being a villain, he achieves results through intimidation, threats, and blackmail, but never kills innocents. Before becoming much more villainous, he previously worked alongside Québec as a pair of Hunters, though the amount of effort he put into their missions was questionable.

Bruno is a scraggy and gray German Shepherd Caninu dressed in a stylized black robe covered with a red cape. He wears a black conical hat with the Kurvaz logo on it, and wears multiple rings. Despite his entire aesthetic being inspired by Nipon, it's made clear in Bitter Rain and other official material that it's all simply due to fascination with the culture. His accent is purely that of a Shepherd native.

In Forest of Healing 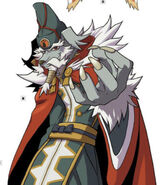 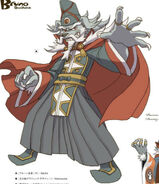