JP + FR: Shinnosuke Tokudome
Boron Brioche is one of the main characters in Fuga: Melodies of Steel. He is one of the first few children to board the Taranis after the destruction of Petit Mona, where they go off on a rescue mission to save their parents.

Boron is one of five children born to his father and mother, a farmer and cook, respectively. Always calm, he dislikes fighting. Although he's a big boy, he often acts like a scaredy-cat crybaby.

Boron is a heavily built Chartreux Felineko. His attire is that of a typical farmer boy and is often seen wielding farming equipment.

Boron lived a carefree life along with his parents in Petit Mona. He often spent his days snarfing down on food, with his favorite being his mother's cake, while ocassionally helping on his father's farm.

Life changed when the Berman attacked Petit Mona, abducting his mother and several other villagers. He then joined his friends in boarding the Taranis and journeying across the continent to save them.

Canonically, Boron and his friends survive the war, and returns to peaceful days devouring food from his mother.

A Cannoneer, in terms of pure stats, Boron is the slowest and strongest of the entire Taranis crew. He isn't quite as reliable as Malt on offense due to starting out with expensive area skills you won't need in the early stages of the game, but he gains much more utility later on. He gets defensive skills that decrease the Taranis' damage and protect the crew from injury (very important against stronger enemies), and he even gets the "Lullaby" healing skill for aid in a pinch. His final skills deal massive damage at a cost: One of them inflicts Boron with fear, the other is incredibly powerful but delays the entire party. As a support, he grants injury resistance and his link attacks restore HP, while his Hero Mode destroys all armor and inflicts weakness on the enemy. Ultimately, Boron ends up as a "paladin" archetype for the team: His main role is defense and support that will allow the rest of the crew to focus on fighting, but if you choose to fight with him he can be incredibly powerful in his own right.

In the later game, his area skills can be strong enough to eliminate entire enemy boards, assuming they connect. This weakness can be overcome by achieving a high Link level with Kyle, enabling Boron to wipe out all of the less powerful enemies on the board with a single Skill. At level 10 Link with Kyle, his area attacks have 100% accuracy even on flying enemies. This strategy also compensates for his relatively slow speed, as his long recovery time is irrelevant if the enemy group is defeated. 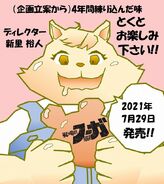 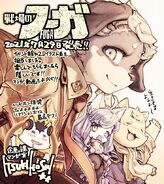 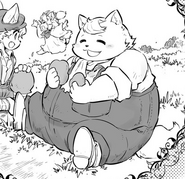 Boron as depicted in the Fuga manga