Béluga Damiens (ベルーガ・ダミアン, Berūga Damian) is a mysterious Hunter who seems to be in league with the Kurvaz. Through most of the story he is constantly appearing before Red Savarin with his personal Mecha, the Salamander//009. His true identity and reason for aiding the Kurvaz is unknown, though he seems to have some connection to Elh.

Béluga has a calm and cool personality and gets straight to the point. He will not hesitate to meet his goals. He usually is not good at conversation as pointed out in the story when he tries to talk to people for information.

Béluga is a light purple lynx with red eyes. He dresses in a very western-style of clothes, complete with a flowing scarf/cape. His bodysuit is mainly dark purple, and he carries twin pistols on his belt. He has a very noticeable "X"-like scar on his face which was caused by a vicious slash from Baion's mecha. 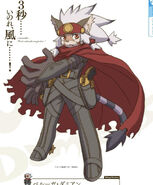